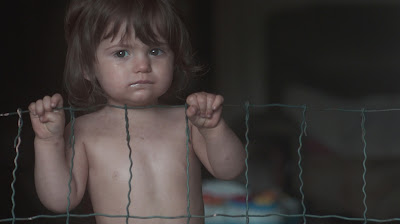 Oceana in West Virginia is called Oxyana because there is so much prescription drug addiction that pretty much everyone is one something. Crime is rampant. The town is effectively dying. This film is the story of some of the people in the town.

What could have been a solid 30 minute film is stretched past the breaking point at 83 minutes. While there is nothing  really wrong with the film, it suffers from from a major problem it repeats it self over and over and over again.

If you watch this film you'll learn that:

Its frightening and sad to start, but then it gets dull and boring and you disconnect.

This would be a great film if you cut 50 minutes out of it....that's not likely to happen, but that's what they should do. (Actually what they should do is focus on  the man and his wife who are living a heart breaking tale of drugs and cancer...)
Posted by Steve Kopian at May 01, 2013