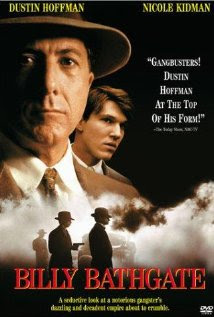 With a screenplay by Tom Stoppard based upon the novel by EL Doctorow Billy Bathgate is one of the underappreciated gangster films of the 90’s.

The plot follows young Billy as he makes the acquaintance of Dutch Shultz and begins to move within his circles.

Not particularly loved in its day the film seems to have aged nicely. I’ve always been a fan of the film , but I recently had a couple of conversations with people who saw the film in its recent cable rotation and they remarked that they liked it better than before. Perhaps maybe the film will finally find an audience.

The film stars Dustin Hoffman as Dutch Shultz. To my mind it’s one of the rare occasions where Hoffman has a role where he actually disappears into it. I’m sorry if that doesn’t sit well with the many people who love Hoffman, but to me, with rare exception Hoffman is always Hoffman. And many other times if he isn’t himself, he is playing everything with a nod and a wink. Here he doesn’t do either of those, here Hoffman disappears into the role and manages to get both the softside of the man who befriends Billy and the mad dog killer that ultimately made him the wrong enemies.

Also in the cast is Bruce Willis in a small role as another gangster and Nicole Kidman as Hoffman’s girl. Both are really good in roles that seem a couple degrees off from their typical roles from the period. Actually the entire cast of well known character actors is top notch with a single exception…

The single exception is Loren Dean a rising star who went nowhere. Dean plays the title character with an affected accent that never seems to be natural. He also carries himself rather stiffly. He always seems to be acting and not being, with the result that the film doesn’t have as firm a center as it should. He’s not bad. Rather he’s too mannered and he seems out of place in a cast all seems to be inhabiting their characters. (To be honest it’s clear from this film, why, despite a big a big push Dean never became a superstar.)

I really like this film a great deal. It’s a really good look at the gangster life in the early 20th century from someone a bit closer than someone on the outside. I know that bits of the film seem polished or well-remembered but the film is more a kind of memory play than an actual straight recording of events, this is Billy’s story and the way we see it is as he does.

This is a film that’s in need of rediscovery. While not one of the great gangster films of all time, it is a really good one. For some reason I think that people want gangster films to be great out of the box or else they ignore them- this is one you shouldn’t – track down Billy Bathgate it’s worth the effort
Posted by Steve Kopian at May 11, 2013