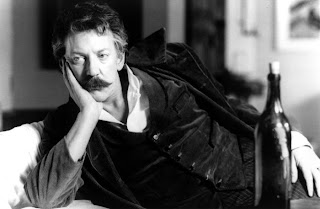 My friend Lou loves this film. I’m less certain of it. I know when the film came out in 1986 I liked the film much more than I do now. Somehow I think the films daring has dissipated over the last almost 30 years.

The film opens when Paul Gauguin returns from Europe to show his works. His style and his personality upset many who don’t know what to make of either the man or his art. What is clear is that the ladies love him and he has trysts with several women, is lusted after by the young daughter of his landlord and battles his wife over money (in particular an inheritance left to him by his aunt).

Consider this the portrait of the artist as a cranky man. Gauguin loves the attention but hates the small minds around him. He loves the ladies but is kind of bewildered by the attachments they form to him. It’s a deliberately paced film that reveals why Gauguin left for the islands and why he couldn’t understand why the world wouldn’t behave as he thought it should- consider him a genius. For my money it’s a good film but there are no real grand revelations. Gauguin was a twit and while there is no doubt that he was a genius he was difficult to take. On a certain level I have no idea what the point of it all is.

So the question is if I’m not thrilled with the film why am I writing it up?

First it really is a good film even if it’s far from great. It’s a film That very much depicts a place and time nicely. It also has a wonderful performance by Donald Sutherland that is greatly nuanced.

Second the film is completely off the radar. Hell in the US the film has always been, barely getting a release in the US from a small company, playing a handful of art houses. It then was dumped on to VHS by a small releasing house and has been MIA ever since. Reservations aside the film is a good enough film not to have fallen into the cracks of oblivion

The third reason was to get your input as to why the film has fallen into the cracks. Is one of the reason the that no one wants to handle the film the occasional naked performance of the landlords daughter, who at the start is around 14? Or are there other reasons the film is now adrift somewhere in the Unseen film world?

Ultimately inoffensive and worth a look.
Posted by Steve Kopian at May 23, 2013