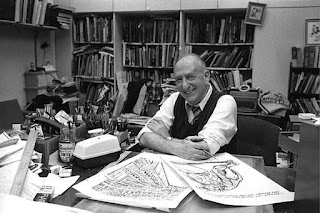 Somewhere in my collection of books, well not so much somewhere, I know where it is, is a collection of cartoons by the cartoonist Herb Block aka Herblock. The purchase of the book back in my late teens confused the hell out of my parents. Why would I want a collection of political cartoons? Because they were Blocks and because they transcend the moment to be something more.

Block’s work changed things in America. Much like the work of Thomas Nast in 19th century New York Block’s work managed to reveal what was going on in the world oh so much better than what the words or the reporters on the papers that carried his work did. Block was a genius who more often was ahead of the curve (he coined McCarthyism at the moment McCarthy started his nonsense and was blaming Nixon for Watergate days after the break in not weeks and months later). He was a guy that told it like he saw it, which was very often the way things were.

HERBLOCK THE BLACK AND THE WHITE which premiered at the Tribeca film festival a couple weeks back is a celebration of the man and his work. A combination of talking heads and an actor portrayal of Block expressing his words the film firmly explains how important Block was. They also explain how amazing it was that he could turn out the body of work he did. As Lewis Black says in the film Block alone did what it takes the 40 writers of the Daily Show to try to do.

It’s a wonderful tribute to the man himself, on many levels that would be enough to make this one of the best documentaries of 2013, but the film manages to go the extra mile and do more. Not only does the film chronicle Block’s life, it also chronicles the 20th century. Despite seeming like a no brainer, I mean Block’s cartoons revealed what was happening in the world as well as politics, I’ve seen films on political cartooning that concentrated on the art and failed to put the body of work in context. HERBLOCK wisely keeps a kind of historical parallel going where we get just enough information to watch the shifts in society on a greater level than to just go from prosperity to depression to war to McCarthyism to Vietnam to Watergate. We see some of Blocks lesser cartoons which snap us away from the big subjects.

It’s good enough that I really wish that had been run earlier in the festival and had more screenings so more than a handful could have seen its brilliance.