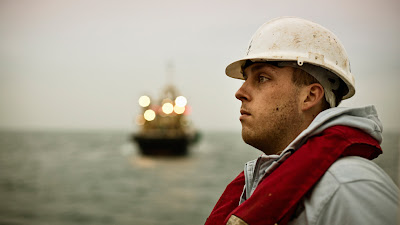 Finished the day before the premiere, Raw Herring tells the story of the last real herring fishers in Holland. trolling the oceans they look for decent sized fish that can be sold as true Dutch New Herring. Splitting it's time between the men on the boat and the families at home the film shows what goes into a dying business.

Opening with some stunning footage of the birds that follow fishing ships this film sets the bar high on the oh wow factor with it's images of the film then settles down to showing the lives of the men on a fishing vessel with the lives of their families at home. While the men try and find the dwindling herring schools the people on shore worry and attend various functions.

Okay let me cut to the chase, you need to see this on the big screen. I mean a BIG screen. The reason is that any of the material on the sea such as the bird sequences or the fishing sequences are so spectacularly shot you'll want the chance to fall into the film. The fishing sequences blew my mind as the cameras seem to be in impossible locations or up at heights that on the big screen give you vertigo. It's so jaw dropping that I regret not sitting in the front row. (You'll forgive the lack of discussion about the film beyond the images but the images simply over power the good story)

Before you ask, yes some this is similar to the material in the awful LEVIATHAN which played at the NYFF and in theaters. However where LEVIATHAN was super close up on things to the point where you didn't know what the hell you are looking at, here we get images that dazzle the eye and characters that are real people. And while we do see some fish cleaned and gasping for air it's not the gore fest of the earlier film that made you want to lose your lunch.

As films with images that are going to make you gasp go this is one of 2013's best theater going experiences. Go see this film in a theater, trust me, you'll thank me.
Posted by Steve Kopian at May 01, 2013