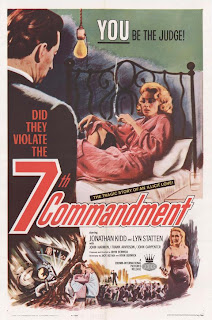 Completely weird film noir about a con man who staggers from a car accident with amnesia. He becomes a successful preacher healing the sick, building hospitals and churches and being a good man of god. When the girl he was with in the car sees his picture in the paper she plans revenge for his leaving her to take the rap for the accident. Working with her boyfriend she takes steps to get money from him and ruin his life.

Full of sleaze and praises for Jesus, this twisted little tale is kind of a must see for anyone wanting a truly psychotronic film. So much weird stuff happens that I was watching the second half of the film with a kind of morbid curiosity that one gets at the scene of a grizzly accident. I kept wondering what the next twisted twist was going to be, outside of what might happen in the next couple of seconds I couldn’t guess where this was going to go. I really do mean it when I say I had no clue what truly whacked things were going to happen in the last 20 minutes. It’s one unbelievable thing after another…

…most unbelievable of all is the fact the film makes it work. It shouldn’t but it does. I’m guessing that it works because it’s all so far out there that by the time it gets really weird and the bodies start piling up you can’t help but go along. To be certain you’re laughing at what’s happening but you’re also riveted to the screen because you can’t get wait to see what happens next.

I have no idea if I like the film but god damn I’m in awe of it. Hell I played a couple of sections over a couple of times simply because I couldn’t believe what I was seeing and was certain I missed something. I hadn’t.

If you want to see a truly out their film noir give this film a shot. I’m sure it’s weird gyrations will hold your attention.

Out as part of Images/Something Weird’s Weird Noir collection (and boy is it ever)
Posted by Steve Kopian at May 18, 2013