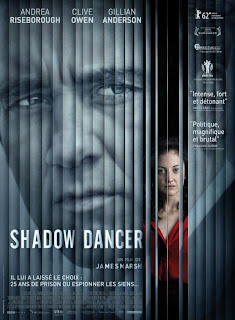 Solid thriller creates tension from the minute is starts with a wicked prolog that explains why our heroine does what she does. The tension continues all the way to the final fade out as was demonstrated by the writer sitting in front of me at a press screening who literally leapt out of his seat screaming and tossing his papers at a certain event (the theater was full of papers when the film ended)

The plot follows Collette who is caught placing a bomb in a London subway for the IRA. Told by Mac (Clive Owen) that if she doesn’t cooperate she would probably never see her son again she agrees and is thrown back into the wolves den. However things go instantly pear shaped as the IRA begin looking for a traitor when an assassination goes wrong. As Collette tries to throw off her pursuers Mac tries to find out why his new asset is being left out in the cold.

This is a great small scale thriller that grabs from the first instant and keeps you wrapped tight all the way until the end. It’s one of those great thrillers where you don’t know who to trust because it’s clear from the start even your family might be against you.

Don’t look for a deep political discussion, the politics are secondary to just telling a damn good story. This is one of those small scale gems you’ll want to put on when you want to curl up on the couch and just watch something on a rainy Saturday night with a big bowl of popcorn.

(And if you want to know how good it is, someone at the press screening I attended had seen the film before and came to see it again because she liked it so much)
Posted by Steve Kopian at May 30, 2013