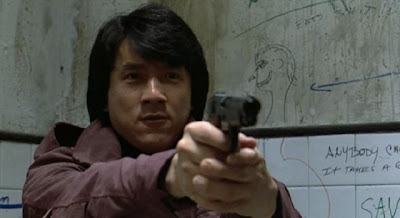 Jackie Chan is probably the second best known Chinese actor in the US behind Bruce Lee. Never mind that Lee was American, because the majority of Lee’s films came from china he’s considered a Chinese actor by many people.

Jackie Chan is wholly Chinese. He grew up attending the Peking Opera school with Sammo Hung. He moved on to making movies where he made his entry into films with attempts to be the next Bruce Lee, but it wasn’t until he found his comedic style that he went into super stardom. Jackie was so big at the end of the 70’s and early 80’s that there was an effort to cross him over into the American and western markets. He made the barely seen Battle Creek Brawl(aka Big Brawl) before the Cannonball Run movies which did little more than dent American consciousness and make them aware of his existence.

In 1985 two things happened that started to move things, first Chan made the first Police Story film, which hit screens at prestigious festivals across the world and had many people asking who is this Jackie Chan? The other thing that happened was that Chan tried once more to cross over into American market with The Protector.

The Protector is a much reviled cop film starring Jackie as a New York City cop partnered with Danny Aiello who get involved in a kidnapping. Following leads that seem to point to the victim’s father the pair end up going to Hong Kong where all sorts of mayhem ensues.

Written and directed by James Glickenhaus, a king of 1980’s exploitation (The Exterminator, McBain, Shakedown) the film was a battle ground during production. Jackie didn’t like the way the film was being done, and he disliked the script. He had such a miserable time that he had the film recut and new sequences shot for release in Asia. For better or worse Jackie had made a bad choice by hooking up with an American exploitation director who wanted to make a guns and bullets film which went against what Jackie was doing at the time.

For my money The Protector isn’t a bad film. It’s a Glickenhaus exploitation film with Jackie Chan in it. It’s a film, in it’s American incarnation, that is closer to what he’s been doing the last few years. It’s a darker film than Jackie had really done before and it has almost no real martial arts. I saw it when it came out, and I’ve seen it a couple of times since then, and while it’s not a great film, it’s probably better than some of the recent American films he’s done.

I have not (large apteryx) seen the Asian version, which is supposedly better and which is now nigh impossible to see.

I have seen the version that Video Search of Miami put out many years ago which is best described as a Franken-film. This version combines the two versions of the film. It adds in everything together replacing the Chan action for the American.

As it stands now I think the Protector is worth seeing, more so as an example of a failed experiment in marketing a superstar than as a completely working film.