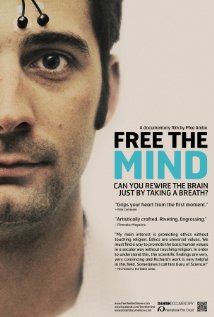 This is an amazing film on the ability of meditation and breathing exercises to help and to change the outlook of returning vets as well as help kids with ADD and other learning problems.

I’m kind of floored on how simple exercises can start to ease complex problems. The film follows Dr Richard Davidson as he conducts studies to see if meditation and mindfulness can change the brain into something less troubled. They know from studying Buddhist monks that the three months of meditation can radically change the wiring of the brain, here Dr Davidson  tries to see if changes can be achieved in a shorter amount of time. Over the course of the film we follow several veterans who are having trouble readjusting to civilian life. We also follow a Will a young boy with emotional problems as he learns to focus on things other than his fear and is able to take an elevator.

It may not sound like much but this film will knock your socks off. This is an amazing film that very quietly shows what can be done by just by breathing and focusing. It's something that may not work for everyone (one vet drops out since the meditation if forcing him to deal with things he isn't ready to deal with) but it shows very clearly we may not have to medicate ourselves into oblivion.

Far from a big flashy film, this small scale gem really impressed me. The simplicity of the presentation works wonders since it echoes the simplicity of meditation. I really hope that people see this film and that what has been learned to help the vets.

You’ll forgive me for not going into the film too much, but somehow the simple power of this film requires a simple review which would be Go see this film.
Posted by Steve Kopian at May 02, 2013