SUNNY is the next free movie at the Tribeca Cinemas 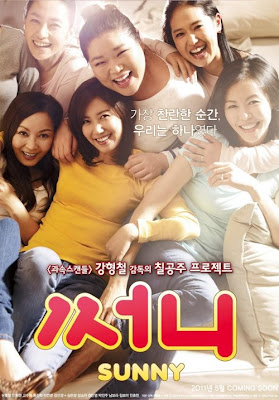 The free movie Tuesday at Korean Cultural Service free screening in Tribeca is Sunny. Part of the --- series the film is infinitely lighter than many of the recent films. I have the film as an import DVD and if I can dig it out I’m going to put up a review before the screening Tuesday.

Here’s what the Korean Cultural Service says about the film

From our "Laughter and Love at the Box Office!" series:

Girl power! In this award-winning hit, a group of schoolgirls form a timeless friendship, bonding over their willingness to do whatever it takes to help each other out.

A country girl, relocating to Seoul, becomes a part of the clique… but when an irreversible tragedy strikes, the group finds themselves forced to go their separate ways. Twenty-five years later, when two of the girls happen to meet by chance at a hospital, they decide its time to get their friends back together and make their lives “sunny” again! An irrepressible feel-good comedy, Sunny was tied with the historical action blockbuster War of the Arrows as the biggest Korean film of 2011!