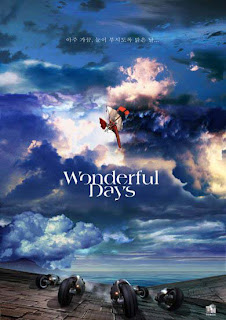 Looking in many ways like the film the Final Fantasy hoped to be Wonderful Days tells the story of several people in a world underwater and where pollution is the only form of fuel.

Its an odd mix of 3D CGI, Models and 2D animation that sets up a world that could be ours several decades from now. The title is ironic, there is little joy and happiness for anyone and the Wonderful Days of the title refers to a shared childhood memory of two friends actually seeing a cloudless blue sky.

The plot, concerning an attempt to bring back that blue sky and return freedom to the world has been done before. Whats interesting here is the animation which mixes the various elements into a cohesive whole. The long motorbike ride that opens the film would be stunning on a large screen, had I been lucky enough to see it projected that way. There are numerous references to other films and animated series, (the battle of Spike and Vicious in the church in episode 5 of Cowboy Bebop springs to mind)are nicely placed and not to distracting.

The film suffers in the final third as things become less clear until the final tragic battle has a few too many "how did he get here" moments. The ending, as unhappy as the title would make you hope is nicely in keeping with the whole feel of the film. Unfortunately the ending is probably whats going to keep this film difficult to see outside of imports and festival screenings.

If you like animation, science fiction or off beat films, see this film, you will not be disappointed.
Posted by Steve Kopian at May 09, 2013