Why aren't you going to see Colin Quinn's UNCONSTITUTIONAL? 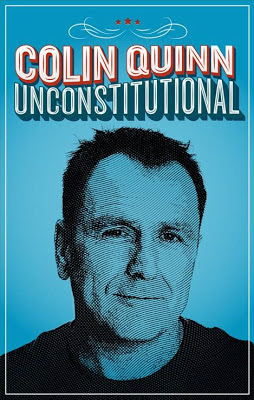 I was going to write something up about Colin Quinn's new show Unconstitutional after I saw the play a second time but I changed my mind since they are offering killer discounts. The show is good enough that I think I should try to get you to go while you can save a few bucks...

Where Quinn's last show (Long Story Short) took on all of world history in about 75 or 80 minutes, here Quinn takes on the US Constitution, from its writing at the Constitutional Convention onward to today where it's invoked by people like Reese Witherspoon in drunken certainty. Actually Quinn feels that the whole document is bathed in alcohol since it was written at a convention, where you drink and it's frequently quoted by drunk people who appear to be the only ones who have actually read the four page document.

Quinn is probably the most intelligent comedian working today and he is not afraid to prove it as he's making tears roll down your cheeks. Quinn takes apart the various freedoms granted in the Constitution with a great deal of ease. From freedom of speech (he talks about how if if things were more like China there would be two guys by the door to make sure he stayed in line- which is what happened when he did Long Story Short there) to what freedom of religion meant to the Founding Fathers (various forms of Protestantism) to the right to bear arms which turns side ways (he says he is pro gun, pro choice, pro death penalty or as he or as he says he's anti-over crowding). Largely he takes our political process and shines some light on it, proving quite clearly, that votes really do count (If votes didn't count why do they court the Hasidic Jews?).

Prowling the stage, the stairs (the set is on multiple levels), the audience (he enters through it) Quinn is like the best teacher you you've ever had only ten times funnier. Quinn takes a subject which he loves and knows intimately and explains it to us in a way that make it not only fun, but alive and relevant. With the discussion of the Constitution he puts it into our daily lives, or at least the lives of the people we see on TV. Quinn's characters, founding fathers, actors, politicians and regular people caught up in events, are not a bunch of names that you know only from the page, but guys you'd hang out with, or in the case of some of the people he doesn't like, someone you'd make fun of. And as I said, he knows the subjects about which he speaks well enough that I suspect he'd win a good many arguments with many of the lawyers I know.

The best part is he is damn funny doing it. Sitting in my seat Tuesday night I found I kept trying not to laugh too hard lest I lurch forward and bang my head on the railing in front of me. I know that probably would have made Quinn smile to know that his jokes made some one fall unconscious or die laughing, but it would have wrecked what little dignity I have. I  found myself trying to stifle laughter because I didn't want to miss the next line which is often funnier than the one that started the laughing in the first place.

You'll forgive the lack of details in what Quinn said, but as I said I wasn't planning on writing this up until I saw it a second time. I need a second time to remember more of  than just sitting in my seat laughing. Like the best comedy shows Unconstitutional is the sort of thing you just laugh your ass off at and then try desperately to remember what you were laughing at so you can explain it to your friends (or so you can steal the jokes for yourself). I may talk about the intelligence of the the show, but ultimately it's just god damn funny, which is all that matters.

See this show before it leaves.

As I said there is a discount. Tickets for the run,  which ends June 3, are $35 bucks if you use code CQUSTX (the code is not good for Saturday at 8)
Tickets can be had in three ways:
Online at Smart Tix
By Phone: 212-868-4444
Or in person at the Barrow Street Theater Box office (you're suppose to bring a copy of the email I cribbed this info from but I'm hoping if you just give them the code or a copy of this piece they'll late you score some cheap seats.)


And best of all the Barrow Street Theater is so small there are no bad seats.
Posted by Steve Kopian at May 12, 2013

Email ThisBlogThis!Share to TwitterShare to FacebookShare to Pinterest
Labels: american, comedy, not a movie