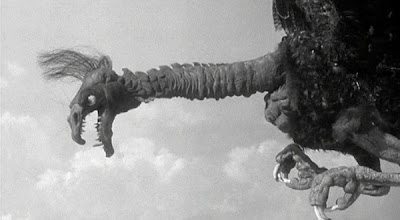 Those looking for high art can look elsewhere. The Giant Claw is one of the all time so bad it’s good films and should not be taken seriously. Taking this film seriously will only result in the destruction of mind and body much as trying to live after jumping from the Empire State Building. In all seriousness if you look at this film as anything serious you will be sent away for a very very long time to a place where sharp objects will be kept out of reach.

The plot of the film has a giant bird shaped feather duster coming from space and wreaking havoc on mankind. Jeff Morrow, a good actor in need of a paycheck attempts to mobilize a force consisting of miniatures and stock footage to combat the threat.

Rightly ridiculed for decades this is a bad movie lovers dream. It’s a seriously made bad movie completely done in by a terrible monster. We’re supposed to be frightened by that? Apparently. While I know the basic premise requires suspension of belief, but the creature is so bad that the battle is lost.

This is a party film. It’s a film you put on with friends and make fun of it. Watching the film you can’t help but automatically but it’s more fun with friends.

The weird thing about the film is that as bad as the film is, and as beyond bad the monster is, this is one of those films that once seen you will never forget it. It’s a film that can’t be unseen. Say what you will there is simply something about the film and it’s monster that stays will you and forces you consider that this was made by adults for adults…. And when you realize that everything that Hollywood has ever done that made no logical sense suddenly does. I mean if they were craziy enough to give us this as a serious film, why wouldn’t they turn out some of the other crap they’ve thrown out there.
Posted by Steve Kopian at May 05, 2013