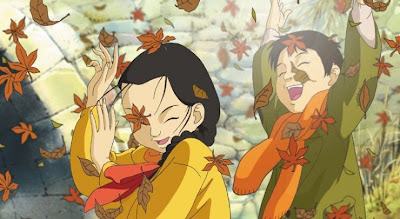 I'm assuming that this is a tale well known in Korea, the films country or origin, since there is at least one other version of the story and there is a note at the end about further outcome. I also don't think this would be the type of film most parents would choose for their kids unless they knew the story. I was going in a bit blind and it knocked me on my behind.

The story is a Buddist tale of a little boy and his blind sister who wander the country side begging. They are "looking" for their mother, whom the elder sister knows has died in the fire that left her blind. Through circumstance they end up staying with a bunch of monks and well... any more would be telling.

This is a heavy movie. The film has left me emotionally shot and thrown for a loop. Someone's compared it to Grave of Fireflies, which I don't think is fair, other than it leaves you with a strong emotional feeling. Its a very good film that I'll have to watch again when I feel up to it. I recommend it to anyone who wants to see what can be done with animated story telling.

If you want to be moved, see this movie.

A word of warning :I don't think that it really for kids, especially children raised in Western, non-Buddist traditions. I don't think they'd understand some of what happens, especially when most of them don't understand how serious cartoons can be. Parents don't give this to your kids until you check it out yourself.
Posted by Steve Kopian at May 06, 2013