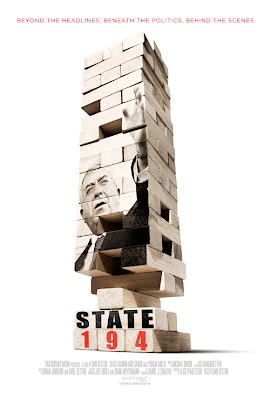 If you build the foundations of peace will it come? Promo material for State 194

Good looking film that seeks to examine the quest for peace between Israel and Palestine.  Focusing  on Palestinian Prime Minister Salam Fayyad and his work to create a state for Palestine by proving to the world that they not bad people the film takes a hard look at the chances for peace and how it maybe the small things that bring about change.

Its probably not a good thing to have the first thing you say about a political documentary, especially one as important as this one, is that it looks good but that was my over riding reaction to the film. the film is full of carefully composed images, great looking news footage and few shots that are much too polished for a film such as this (did we really need crane shots of cars traveling?) The film is one of the most artfully assembled films I've seen in 2013.

Getting away from the technical aspects and diving into the important stuff, the subject of Palestinian and Israeli peace the film is a good look at the difficult subject. It's a film that presents Fayyd as a tireless worker who bounces around the globe in an effort to gather support for his people and to keep the peace. As the above line infers Fayyad is building the foundations for the end or at least the great reduction of tension.

Film maker Dan Setton has made an important film that manages to go into detail about what the leaders are doing to bring about peace. Most films on the subject such as 5 Broken Cameras deal with the issues on the average Joe level, which is all fine and good but after the 12th look you kind of wonder who the leaders are and what they are doing. This film fills in that gap and does so nicely.

That may sound like small stuff but it's not . It's something the world needs to see since we have to see  what is being done at a higher level than the village one when the Israelis decide to build yet another settlement.

The trouble is that the film is so artfully assembled and slick that the film seems like a commercial more than an expose. I return to this point because to be perfectly honest the film is so slick that for a good fifteen or twenty minutes my attention was slipping off the screen. There was too much flash to start and it wasn't until the film settled down that I fully engaged with the film.

For additional information on this important subject please go here.