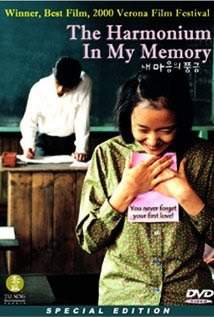 Memory film (barely) about what happens when a new teacher comes to a small rural village in Korea in about 1960 where he woos one of the other teachers and has is the object of a crush by one of the students. A look at the rural life from inside and outside the village with a strong romantic thread through out.

For what ever reason this film didn't really resonate with me, it was a good slice of life film, but for the most part it just didn't blow up my skirt. The performances are good and the film really seems to capture a specific time and a place (or is it overly idealized owing to memory?) but for what ever reason it just was there. Perhaps it's because I'm not a girl or perhaps the film was just outside my experience. More likely its that the film seems to set up as an almost typical coming of age story similar to the ones that were made in Hollywood during the period that the film is set. I was never a big fan of those, so its little wonder I'm not a big fan of this. This isn't to say that the film is bad, its not, rather its to say that the film almost pre-selects its audience, with those not liking romantic coming of age films less likely to be enthralled.

Worth a look if it's plot makes you curious. (I only picked it up as a VCD in Chinatown for a buck because it kept appearing on my Amazon recommends list- however I am including it here because anyone I've gifted with copies- all women- have gone gaga for it).

One word about the ending- the film ends with a shot of a photo that reveals what happened after the main story ends. It maybe hard to see on video who is in the photo so you may want to check the message boards here at IMDb or elsewhere
Posted by Steve Kopian at May 07, 2013