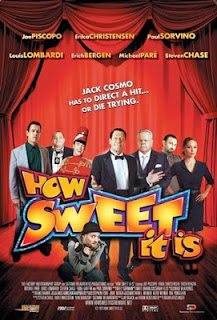 I concieved my daughter listening to your soundtrack, she's fat and a hunchback-I don't blame you - Paul Sorvino to Joe Piscopo

Ex Broadway icon Joe Cosmo (Joe Piscopo) owes money to the mob, taken to the boss (Paul Sorvino)  because owes too much money. Cosmo is surprised when he finds out that the boss is a huge fan of his. He's even more surprised when the boss forgives his debt...on the condition that he write, produce and direct a musical in three weeks. With no choice but to do so Cosmo wades in using many of the other people who owe money to fill out the cast and crew.

Let’s get this out of the way- This is a frequently hysterical comedy with some great songs, great performances and a show must go on attitude. If the plot of the film becomes clunky in the final half hour the good will the film has generated in the previous 70 minutes more than makes up for it…as does a moving finale.

To put it another way I put on the screener I was given of the film about a half an hour before I was going to go to bed and then ended up staying up two hours past my bed time.

Yes it’s that enjoyable,.it's not great but in the right frame of mind it is enjoyable

The first thing you’ll notice about the film is that the songs are pretty. Being a long time Broadway show goer I’ve heard good songs and bad songs and these songs are definitely good songs. The first one we hear is heard during the opening credits. Even allowing that the film is a mob comedy about putting on a show the fact that the film opened with what amounts to a show tune threw me off. I didn’t expect one out of the box nor did I expect good ones.

The second thing you’ll notice is the cast is great. I think that this is not your typical run of the mill comedy helped give them performances that are more than what we usually get from them. Piscopo is a joy as Cosmo, the down on his luck show man. Yes he gets to sing and act goofy, but he also gets to really act. He is a drunk and down on his luck guy who just wants to reconnect with his daughter, and piscapo manages to make the heartbreak real. Please someone give him more serious acting roles. Michael Parre, seeming stuck in an endless cycle of tough guy roles is a scream as the Big Boss’s son. He just wants to break heads but finds his father’s way isn’t working (and we’ll not get into his father issues which are the result of an unloved birthday gift). Parre takes the chance to be funny and scores big time- his monolog about the pain of beating someone up is priceless (it plays better in the film than the mangled version in the trailer would have you believe).

The rest of the cast is equally good, thanks no doubt by the fact they aren’t doing things in your typical low budget films.

The capper is the script. What a joy it is. Not only is it full of wickedly funny one liners, monologs and exchanges, but it also gives us some completely out there characters. If you want proof all you need to is watch the fall down funny audition sequence where one weirdo after another comes in to audition for the show. These are all down on your luck guys and gals and seeing them up on stage trying to win a part is just damn funny. I mean the song about buying crack is both cringe inducing and damn funny. Equally funny is what happens when the chop shop doctor shows up (I’ll not reveal the double whammy of that twist).

This is a charming funny, occasionally tasteless, movie that you really need to track down, especially if you're like me and have suffered through a long dry string of unfunny inde comedies that are complete devoid of talent much less even one viable joke.

Trust me, even allowing that my reaction is due to catching this at the right time, this is infinifitely better than you suspect it is (I mean the trailer makes this look like a big stinky dog)