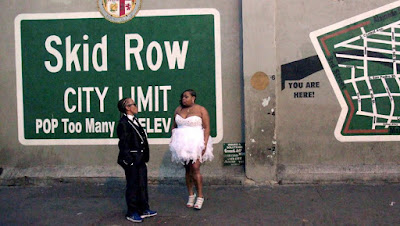 GAME GIRLS begins with one of the women we will follow for the next 90 minutes,Teri, challenging anyone to fight her. She is wandering the streets of Los Angeles’ Skid Row and she is itching for a fight. It doesn't matter with who, she simply wants to mix it up. It is one of the most arresting and in your face moments I've had at the movies all year. It is also the moment that hooked me on the film because I had to see how it all plays out.

The film follows Teri and her girlfriend Tiahna as they try to get their lives together in order to get off the street and away from Skid Row. It is a battle that does not go smoothly since both women are battling not only the world but themselves.

I really like  GAME GIRLS a great deal. This is an in depth look at a part of life that was largely alien to me. That it works as well as it does is thanks to director Alina Skrzeszewska who doesn't seem to take sides and simply reports what she is seeing. She not only reports she also doesn't cut away and let's many sequences play out longer than you might expect so we really feel we are there in the moment. As a result we really get to know the women and like them. We also come to understand why the pair stays together even when things turn bad. And more importantly, on a larger scale the film gives us a clue as to why some people become couples and stay together. Within the relationship between the the two women we can see the relationships we have with the people in our own lives and we are made better for it. It also makes GAME GIRLS a truly special film.

For tickets and more information go here
Posted by Steve Kopian at July 11, 2018