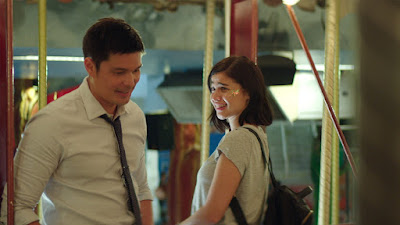 Actually SID AND AYA is a love story, just not a typical one.

Stockbroker Sid has insomnia. Finding he can hold long conversations with Aya, a young woman who works at a near by 24 hour restaurant shop, he hires her to talk with him all night.

Delightfully atypical the film scores points because we really don't know how it will play out. You kind of can, but at the same time these aren't really your typical movie characters so anything is possible. You can't fill in the blanks which not only holds your attention but makes it a much more real film.

How good is this film? This was not anywhere remotely on my must see list. It was a film I went into purely because I was trying to see as many of the New York Asian films as possible. However where so many of the other films depressed me with their bleak sadness, SID AND AYA delighted me with it's one of a kind approach. Frankly this is one of the few films playing at NYAFF that recalled the halcyon days on a decade ago when every film was a wondrous surprise.

One of my favorite films at this year's NYAFF, it is highly recommended.

For tickets and more information go here.
Posted by Steve Kopian at July 12, 2018