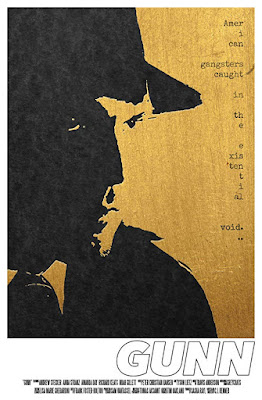 No, you do. So just do yourself a favor and go over to Amazon or Vudu or what ever streaming platform you use and watch it.

I say this because I got one of my favorite sort of emails earlier today, one from a director which is putting their film on my radar. I have a standing policy to look at anything that a director sends me because if they will fight to get there films seen then I will take a look. I recently discovered the great IN WINTER that way and it was responsible for turning me into a huge fan of the work of Jason Kartalian.

After I received the film I did a little research and a couple of pieces on the film intrigued me because they said that they were hooked the instant the film started. I thought they had to be friends of the director, but then again there was something about what they said that made me curious. Despite having films I am required to see and write up I figured I'd take a quick look at the film and  see if I too was hooked...

... and suddenly I lost a couple of hours as GUNN worked it's magic.

A classic film noir, set in period with gangsters, femme fatales, guns, corruption and everything else you can think of in the genre, GUNN goes off the board stylistically and messes with our expectations by having the whole thing set essentially on a stage. It's a grand ploy to mirror the existential angst the genre is rife with. In theory it shouldn't work but it does. I mean it really does.

The opening scene is three guys in a car going off for a job in the night. Everything is dark and you can't really see the inside of the car. The conversation (did I mention the dialog is top notch?) pulls us in, so a couple of minutes in we are hooked. Then the camera pulls back and we realize the guys aren't really in a car, but a mock up....and for a moment you wonder "what is going on- they are on a stage"... but the scene continues on, not missing a beat... and everything is being played straight and by the time they are getting ready to go through a door to rough up some rival gangsters you don't care there are no real sets, you just want to see what happens.

Talk about movie magic. This is it.  It's kind of like what Lars von Trier did with DOGVILLE except this works better since  you forget the conceit. What Renner did with GUNN is so spot on perfect you're going to wonder why no one thought of trying it before.

I not only love how it's done, I love the plot and the dialog and the acting.... I love that when Renner was crafting the film he didn't try to reinvent the wheel. Yes, he framed the story in a new way, but with the story and the characters he didn't shy away from leaning into the typical cliches.  It is as if Renner knew that the only way to really examine the genre was to use everything we think of when we think of film noir and go with it. He wants us to ponder the genre by giving us "the genre" in a new way. It's a bold move that I don't think the vast majority of writers or directors could ever pull off- but he pulls it off thanks to a killer sense of genre, a wicked script and a top notch cast that could sell ice at the North Pole.

I'm so stunned that not only did I misdirect two hours when I should have been watching something else to watch the film, I took even more time away to sit down and write it up right after the fact.

You need to see this film because it is just super. You also have to keep an eye on C.J. Renner because this may be the calling card of a superstar.

Look for it on Amazon Prime, iTunes, Vudu and other streaming platforms
Posted by Steve Kopian at July 11, 2018