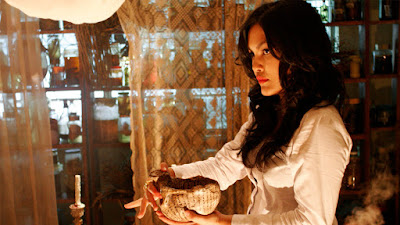 It's been twelve years since director Dain Said completed his true crime/supernatural thriller DUKUN, a highly fictionalized retelling of the Mona Fandey case in Malaysia. Fandey, an ex-nightclub singer-turned-shaman, was accused of murdering a politician in 1993 during a black magic ritual intended to grant him invincibility. The rite, shall we say, wasn't particularly successful: he ended up decapitated with the rest of his body chopped into 18 pieces. As if this wasn't suspicious enough, Fandey reportedly went on a shopping spree with the politician's money where she bought a Mercedes-Benz and a facelift. She was eventually arrested, tried, and executed along with her husband and assitant. The trial gained international notoriety, partly due to the sensationalized nature of the case and partially due to the sensationalized nature of Fandey herself: during the trial she acted like a Hollywood celebrity, mugging for the cameras and wearing ostentatiously colorful dresses.

Whether it was for the film's graphic content, its frank examination of female sexuality, its depiction of black magic as a real and dangerous force (reminder: Malaysia is a Muslim-majority country and Islam is highly intolerant of such things), or its drawing attention to an embarrassing legal case, Said's retelling was declared verboten by Malay authorities until earlier this year. But now that it's been released, audiences can finally enjoy this overlooked and bizarre little movie.

You could slice DUKUN in half with a sword and one side would be a tense courtroom drama and the other an effects heavy horror film. On the one hand we have Karim (Faizal Hussein), the appointed lawyer for the Fandey surrogate here named Diana Dahlan (Umie Aida). Karim refuses to take the job until he's forced into it by a superior who offers to expedite the missing person's case surrounding his 17-year old daughter in exchange. The courtroom scenes where witnesses are examined and cross-examined are standard boilerplate and at best suggest an underlying theme of the lengths religious freedom can be taken--are potentially fatal rituals protected under law? After all, Diana claims, the politician only died during the ritual because he failed to follow the right pre-ritual taboos, in essence committing indirect suicide. But Said ultimately fails to explore it, deciding instead to invest the rest of his time and energy on the other half of the film where a team of police officers investigate an apparent conspiracy orchestrated by Diana, a feat involving hidden ritualistic murder sites forming a giant pentagram, possessed teenagers, and a unpleasant surplus of pickled fetuses and wombs.

Whether these two parts of the film mix will depend largely on the temperament of the viewer--those looking for a straightforward experience might be frustrated by the tonal inconsistencies. But those looking for an intense, genre-bending chiller will find DUKUN satisfying. It may not have been worth a twelve year wait, but it's good that this film finally got it's day in the sunshine.