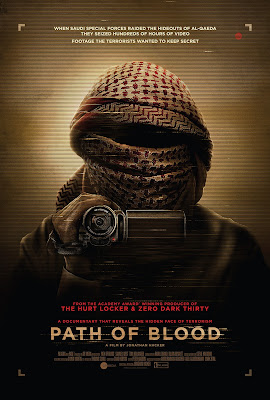 PATH OF BLOOD will leave you reeling. It is a film that will make you laugh, make you cry, and make you feel really disturbed.

Made up of found footage shot by jihadists in Saudi Arabia, supplemented with footage shot by authorities as well, the film reveals what 's like to be in side a terrorist group.  We,watch as they train, rant, and kill themselves and others in the name of their cause.

Disturbing because we it makes clear the dichotomy of the terrorists, regular people one minute, obsessive crazies the next this film will make you think and feel about them in ways you've never considered. What does it take to turn someone into such a crazed zealot? We get some clue but still we are left pondering. Personally I had hoped to get some insight into why they do the cruel things they do but after seeing the film I still have a hard time understanding why one would put on a vest bomb never mind putting a bomb into one's rectum.

Not shying away from showing the aftermath of the attacks they plan, we see the blood and the bodies and parts left behind. This is not a film for the faint-hearted, more so of you can work out what happened in the footage we see (such as the hole in the ceiling made by the rectum bomber's head) The film is a stark reminder of the damage and evil visited upon the world by these people hoping to get a quick trip to paradise.

Recommended and required for anyone who thinks they can go into the mindset of terrorists.
Posted by Steve Kopian at July 10, 2018