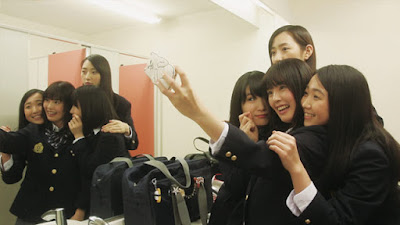 After a teacher is arrested for statutory rape a video of the sex appears. While not clear the girl in the video is thought to be a certain student. This sets of a firestorm in the school and in the media.

Okay drama is in some ways just as sensational as the sort of case that is trying to comment on.

I should note that I don't know how the film is on it's own terms.

I say this not to smug or smart ass but because the programming this year at NYAFF unfortunately has several thematic threads  running through them, in particular dark downer films that turn on the cruelty of people, with a several involving  the cruelty of teens. By the time I saw HUNGRY LION I had seen almost the entire festival (almost all 54ish films) and while it may have been fine to see the pitch black hatred for our fellow man over the course of a year of programming, seeing them in a concentration of a couple of weeks made me tune out and wonder why, if all these films are some sort of representation of real life where teens are constantly killing each other, there aren't more reports of bodies found as a result of the rampant carnage (wait until you see LIVERLEAF or AFTER MY DEATH). Seeing so much hatred on the big screen took its toll (especially when coupled with the daily dose coming from the White House)

The darkness cast by the downer films at NYAFF was so bad that I know by the time I got to THE HUNGRY LION and to several other films after it I simply didn't have the words because I really couldn't take it any more. (I'm sure that a few films at NYAFF will not be reviewed for this reason).

To that end I suspect that ultimately HUNGRY LION maybe  good but unfortunately it suffers by comparison to all the films screening around it at NYAFF.
Posted by Steve Kopian at July 01, 2018