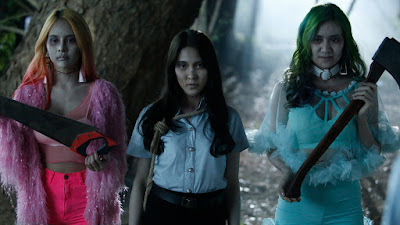 The first death scene in Siwakorn Jarupongpa surreal splatter-comedy PREMIKA sees a nerdy pervert with a gigantic, hairy wart on his mouth get decapitated with an axe in a bathroom by an undead 15-year old schoolgirl after getting sprayed with a toilet geyser of ghost-blood. Said pervert spends the rest of the film as a kind of zombie herald for the schoolgirl, appearing before and taunting her victims before they're forced to play a life-or-death round of karaoke with a possessed jukebox containing the schoolgirl's butchered heart. Those unfortunate enough to sing off key, sing the wrong lyrics, or get lower than an 80 score are quickly sliced, diced, chopped, and/or sawed to bits, becoming yet another member of the ghost girl's entourage as she picks off the rest of the group of tourists, musicians, and investors unfortunate enough to spend the night at the grand opening of a haunted hotel.

The set-up is hilariously preposterous, the characters deliberately one-dimensional, the effects ostentatiously hackneyed--it's less a film than a live-action Herschell Gordon Lewis Hanna-Barbera cartoon complete with rimshotted punchlines, comedically exaggerated double-takes and zoom-ins (usually at the cleavage of the hotel's well-endowed supermodels), and even a chase scene where multiple characters inexplicably manage to hide behind an undersized tree.

And yet of all the films I've seen so far at this years New York Asian Film Festival, it packs by far the greatest emotional punch. It's easy to forget that ghosts--even vengeful ones who murder pudgy, Danganponpa T-shirt wearing nerds with demonic jukeboxes--only stick around on this material plain because of tragedy, and the backstory of Jarupongpa's middle-school killer is so unexpectedly awful that it grinds the whole film to a screeching halt, brilliantly re-contextualizing all the preceding insanity. Most films can't handle such jarring tonal shifts, but Premika succeeds through the very vehicle of its absurdity: the fatal karaoke songs. Before long we realize that the songs the victims are forced to perform are ironic indictments of their pasts. And when the ghost is finally forced to literally sing her backstory, it hits with an emotional heft all the greater for its unexpectedness.

The film's B-plot follows two cops trying to hunt down the ghost's killer, culminating in a twist the film didn't need and certainly didn't earn. I suspect it was only added to pad the film's 91-minute run-time; one wonders if it could've succeeded more as a 30-45 minute anthology short. But as it is Premika is a delightful, gory treat for audiences looking for something different than this year's festival slate of soul-sucking, nihilistic drudges.