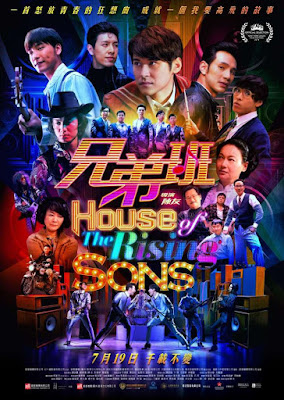 During his Q&A following the world premier of House of the Rising Sons, director Anthony Chan joked that everything in his movie about the rise, fall, and reuniting of 70s Cantopop icons The Wynners—for whom Chan was the drummer—was 95-99% true. Obviously Chan & co. didn’t spend their youth getting into neighborhood noise battles with local tailors, blaring 80s metal for rowdy American sailors, or furiously beatboxing Rimsky-Korsakov’s “Flight of the Bumblebee” in a battle of the bands with a grizzled Chinese Eddie Van Halen. But 95-99% of the film could be described as accurately portraying the emotional turbulence of hitting it much too big much too early with a group of close friends who never had anything but their shared belief in each other and their music. 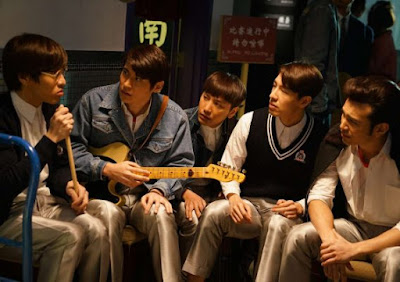 Demonstrating the elastic visual panache of Edgar Wright, House of the Rising Sons plays like a wham-pow kung fu crowd-pleaser with rock musicians standing in for martial artists complete with shaky-cam “fight scenes” where the band squares off with other musicians, gangs of thugs, and even each other, themes of brotherhood and loyalty, and a breathless aesthetic kineticism that makes the viewer feel like they’re being pulled in a dozen different directions at once. Such is Chan's wild abandon that for the first hour we hardly notice that we're witnessing the same tired story beats for rags-to-riches band narratives: a ragtag group of friends banging on cheap instruments in an attic; a disastrous series of early gigs; early popular success; shady label executives trying to pull the group apart with offers of solo stardom for the lead singers. (At least two of the band members deal with disapproving fathers that disown them only to welcome them back with teary eyes once they hit it big and make them proud.)

It's so much damn fun we don't care--would you get bored watching a group of hapless teenagers dodge coffins and giant turtles dropping through the roof of their rehearsal space? Of them squawking Dave Mustaine riffs in the middle of a bar brawl while dressed as Qing dynasty coolies? Of one of their singers crooning through a disastrously maudlin marching band cover of The Animals' "House of the Rising Sun?" 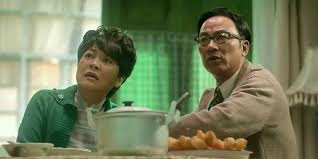 The first hour of this film is a cauldron of unpredictable, chaotic creative genius. But it's obvious that Chan was more interested in reliving The Wynners' nostalgic early days than their decline, for once the band hits their apogee and disentigratea the film loses its spontaneity and settles into auto-pilot. If it somehow managed to maintain the madcap unpredictability and joy of its first hour in its last act, House of the Rising Sons wouldn't just be one of the best films of this year's New York Asian Film Festival, it'd be one of the best films of 2018 period. But the first two-thirds well make the film worth seeking out.

Rock on, you crazy bastards. 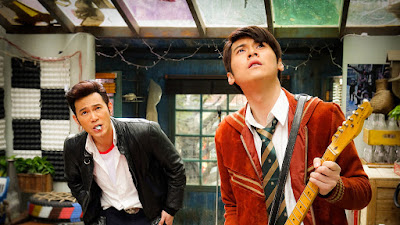