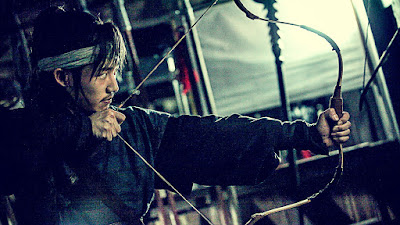 Get a tub of popcorn and belt in as a disgraced swordsman takes a position as a prison guard just as a group of rebels decide to break in and free their leader. Absolute bloody carnage ensues.

Not to worry none of the violence has any weight thanks to awful CGI blood which splashes itself across the screen in in every battle scene. It wouldn't be bad but disappears in the next shot. You would have to be completely blind not to notice. It's really bothersome since everyone should be covered in blod but just keeps disappearing. Once you learn to ignore it the film improves and it just be comes a fun mindless romp.

Bad blood aside this is a truly wonderful film. Of course you won't ever believe it for moment but you will be entertained to the highest degree. This  is all smart ass remarks mixed with a ballet of choreographed violence. It may not be the best of the best  martial arts film you've seen  but it is highly entertaining.

The film also doesn't have a deep thought anywhere in it's brain. This is all action and wisecracks which in this case is more than enough.

Highly recommended for anyone who love martial arts films.

For ticket and more information go here.
Posted by Steve Kopian at July 02, 2018