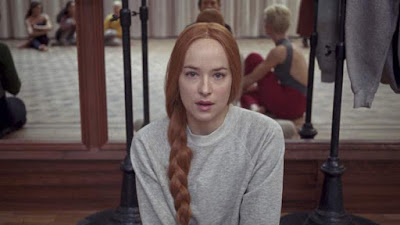 Remake of the Dario Argento classic takes the plot and reshapes it into something else entirely. The nominal plot  has a dancer going to Berlin in order to study dance a prestigious academy. Winning a place she soon finds herself in the middle of all sorts of weird stuff as the school is actually the home of a coven of witches.

Throw back film to the sort of off kilter Euro-horror films of the 1970's and 80's it has a grimy look and feel. Where the original had bright colors everything  this time out is muted and we feel oppressed as a result. Juggling a number of themes about (for a detailed discussion see Hubert Vigilla's take here or Lauren Humphries-Brooks review here)) I personally find the film works best simply as a horror film.  Full of dread and unthinkable nightmares the film chills and drags us along into a weird waking nightmare.

I don't think I need to full investigate the deeper meaning and intellectual horrors when there is enough visceral reaction to raise more than a few goose bumps. Besides I started to pull the threads of the deeper meanings and the film began to be less scary as the mechanics of the chills removed much of the fun.

Is this a great horror film? Maybe? Maybe not? I'm still trying to deal with a film that is an immersion tank of emotion of almost three hours.

Worth a look for the curious.
Posted by Steve Kopian at February 26, 2019