Patrick (2018) opens Friday in theaters and on VOD 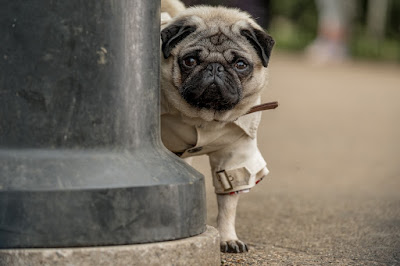 Let’s clear the air- PATRICK breaks no new ground. You know where it is going to go from almost the opening frame. If you are okay with that then chances are you are going to bet utterly charmed by this light fluff ball of a movie. Actually if like pugs you will be more than charmed but madly in love with it.

Not long after Sarah‘s boyfriend is thrown out and she goes through the movies idea of depression her grandmother dies and leaves her spoiled pug Patrick. As she tries to cope with a dog she doesn’t want, in a building that doesn’t allow pets, she grows and romance and friendship blossom.

Yes it does exactly what you expect, and if you are in the right frame of mind you’ll be heaven. Yes you know where it’s going but it’s really well done light comedy featuring some wonderful English actors (Jennifer Saunders, Peter Davidson, Bernard Cribbins). More importantly it features Patrick the pug who has the best deadpan face since Buster Keaton. Had Buster been around to work with Patrick we would have had a pairing for the ages. Frankly how you react to the film will entirely depend upon how you react to Patrick. If you love the sight of a cute pug running around you will love this film.

I did. I mean I really did.

Oh to hell with high art. I saw this film in the middle of watching the mostly pretentious slate of films playing at the Film Comment Selects series at Lincoln Center when I decided to take a break. Boy was I delighted. This film didn’t want me to do anything other than laugh and smile and I was all the better for it.

PATRICK is a delight and is highly recommended who has had enough of pretentious films or the terrible things going on in the world. No it will will not change evil in the world but it will make you smile and remind you that you can still smile.

PATRICK opens Friday in select theaters as well as on VOD. There will be a One-Night Event (100 cities) on February 19th.
Posted by Steve Kopian at February 12, 2019