I know that many people have decided that since Netflix recently picked up WANDERING EARTH there is no need to see it on a big screen, but trust me, if it's playing near you make an effort to go because this big crazy WTF film is exactly what movies were made to do- make us dream together.

In the near future it is determined that in a hundred years the sun was going to begin to expand and thus destroy the earth. In an effort to save man kind it is decided to move the earth to another star system 4.2 light years away.  In order to make the trip the earth will have to slingshot past Jupiter. Unfortunately the gravity of Jupiter causes the engines to shut down and earth quakes  before capturing the earth and pulling it into a collision course. What results is a nonstop action film to save the earth from destruction.

This movie give the term "bat shit crazy" a whole other dimension. Who knew saving the earth would involve so many life threatening stunts and crazy chases? Once the plot is set up this film just races blindly to the end at a speed that is crushing. Its one cliff hanger after another as everything that goes wrong can and our heroes battle to save themselves and the planet. 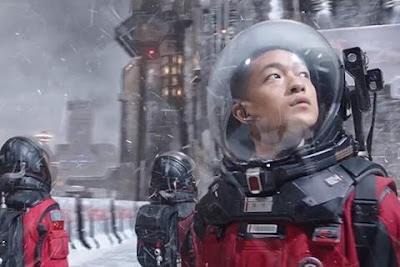 None of it makes a lick of sense (nor is it remotely scientifically accurate) but you won't care because the film just goes like the wind. You'll be more interested in the cool images and wondering who is going to live and die than you will about sense or science. Forget the argument about the mindlessness of Hollywood blockbusters this film has them all beat.

I had heard this film called a "video game film" and i wasn't sure why, but the visual effects often make the film look like a video game. They aren't bad but the crashing ice and speeding transports aren't wholly realistic, which is fine because the wonders the conjure up simply delight the eyes.

While any logical discussion of the film will reveal its a mess on every level, emotionally it's a magnificent thrill ride. You get your popcorn and your soda, belt in and just go. Its an absolute blast and then some.

It is a cinematic experience of the highest order where logic and reason pay no part. An absolute must see on a big screen where the enormity of the vistas and the tininess of the people can truly be appreciated (and be seen as more than dots).

WANDERING EARTH is currently the highest grossing film in China. It is also in select theaters across America. 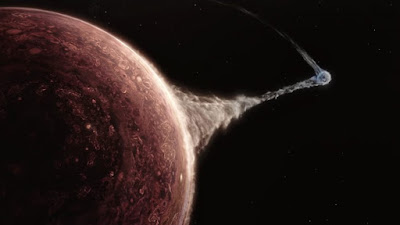