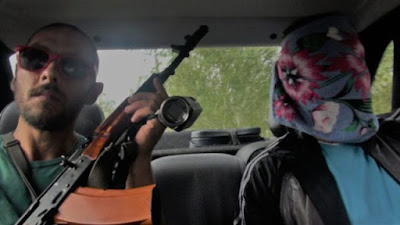 Single take documentary will either thrill you or bore you into unconsciousness. I had a hard time remaining awake.

Beginning with a statement that says that as long as you film you will stay alive the film then jumps to a road in Eastern Ukraine where filmmaker is shooting a bridge that separatists had failed to blow up. Crossing the bridge she and the people there are confronted by soldiers. A stray remark has one of her friends in trouble and when they haul him off she jumps into the car and goes off filming the whole time.

What you think is going to be a tense confrontation is revealed to be much ado about nothing. Its quickly realized that he was no one and was in fact on their side- he begins to tell the soldiers things…and yet Beata Bubenec keeps filming as nothing much happens and the scariest thing is the director gets hit on.

The pieces on the film talk about the banality of warfare but I can’t be that generous, this is just banal. There is nothing profound about it on any level. It’s kind of like watching a home movie where something almost happens a half an hour in and then the person keeps the camera running for another hour for no real reason. And while I’m certain that the filming kept Bubenecsafe (the guy who hits on her is creepy), there isn’t any real reason to watch the footage.

The best way to describe this is as the record of a thing that almost happened but didn’t and some other stuff.