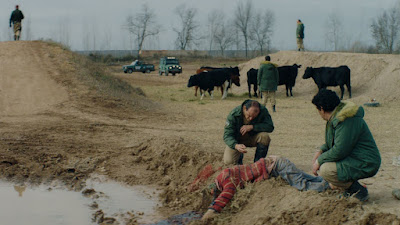 For most of its running time Murder Me Monster is a nifty police procedural about a serial killer in a rural village in the mountains that feels like David Lynch and HP Lovecraft had an evil love child that was delivered in the third row of the local art house. And then things get weird and I’m not quite sure what I think.

Opening with one hell of an opening shot where a woman stumbles through some sheep and into the frame. Her eyes are searching around for something as blood dribbles off her neck. Her eyes go wide as her head falls back and her head begins to tear off. She then reaches up and tries to put her head back on… From there we get the story of a local cop who tries to sort out who is behind the killings (more people die) and whether his lover’s husband has anything to do with them.

Dark, moody and incredibly brooding this is a film that grabs you and draws you in and takes you into the heart of darkness. Director Alejandro Fadel has a lot on his mind and he is going to get it out in some long discussions that add to the oppressive mood. Fadel plays this as a serial killer flick with supernatural over tones for much of the film. Yes we know there is something in the darkness well before the officials, but the fact that they don’t know colors what they talk about.  And once we all know what the hell is going on it changes everything but still keeps us feeling rather disturbed.

How you feel about the movie is going to be altered once we get a good look at the monster in the darkness. A disturbing beast that clearly crawled out of someone’s psychotic sexual dreams, it’s a beast that is destined to go down in movie monster lore for all time. You may chuckle at it a little bit, I did, but my ultimate reaction was “that’s just fucked up”. And while I am not a fan of the tail, he rest of the beast is going haunt you forever…

…but as good as the monster is on a purely visceral level it makes no sense. There is a point where you realize that what the creature doesn’t really fit with what happens in the film. Don’t get me wrong it looks good, it and the mood created by the rest of the film deeply disturbs but there is going to be moment either during the film or after where you’re going to realize it, and several other things, doesn’t make sense...however the feeling on unease will never leave you.

My quibbling aside Murder Me Monster disturbs, deeply, from start to finish and is highly recommended for anyone who wants to see a deeply visceral highbrow horror film. 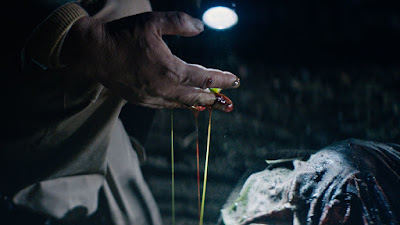