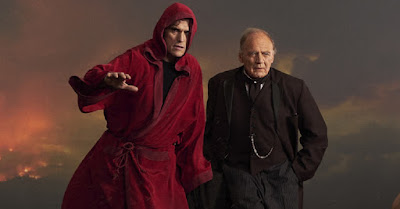 The film is a conversation between Jack  (Matt Dillon) and Verge (Bruno Ganz) where Jack takes stock of his life and his life's work as a serial killer. Jack's reign of terror is ending, the police are closing in.  Then in the final half hour the film swerves into literary territory as Verge (aka Virgil) takes Jack to hell in a riff on Dante's Inferno.

What is intriguing is the conversation with Bruno Ganz that punctuates the kills. The conversation is so much better than the visual vignettes that I kind of wished this was a stage play where it would have been all talk as opposed to having to watch people die by rote simply because the director wanted to pull the audience's chain instead of just focusing what he really wants to talk about. For me the interesting part when it turns into Von Trier's Inferno and Virgil takes Jack to hell because here at last von Trier is doing something interesting. At that point this over long dull film finally becomes something more than a bad slasher film.

Is the conversation pretentious? Oh dear god yes. It completely purple in its prose at times but even so there are some interesting bits which make it kind of worth seeing for the adventurous in a format where they can scan through the dead people.
Posted by Steve Kopian at February 15, 2019