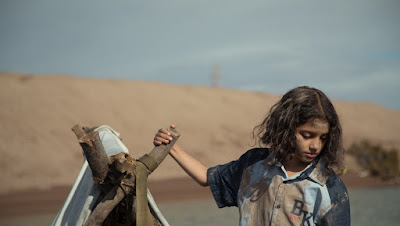 Much too meandering and slightly unfocused film set in the near future where cartels control the country and there are almost no women. The plot concerns a man who runs a baseball field and keeps his daughter disguised so she isn't snatched up and carried off.

Good looking film doesn't know who to focus on. Is this the story of the father whose desperate attempts to remain on the good side of his masters make up a good chunk of the film or is it on the kids who wander through the film?  They should have focused on the lives of the kids because that is where the interesting stuff is. In the brief glimpses we get we get an intriguing look at how kids survive in horrible circumstances. The kowtowing to authority stuff is no where near as interesting.

While never a bad film it  never really engages with our eyes and hearts constantly longing for time with the kids over the adults.
Posted by Steve Kopian at February 23, 2019