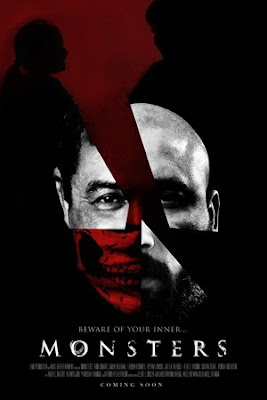 My question about twenty minutes into MONSTERS was why wasn't this on anyone's radar?  Don't get me wrong I love that the Winter Film Awards picked it up but frankly I can't believe that any of the bigger name festivals didn't snap this gem of a film up.

MONSTERS is about three masked men who break into a house to rob it....well...that's what they say but there is a more going on then meets the eye and as a result it all goes horribly terribly wrong.

And that is all I am going to say about the plot because the less you know going in the farther forward on your seat you will be and the more uncomfortable you will become with each new revelation.

Small scale and claustrophobic MONSTERS takes place in a couple of rooms of one house in Morocco.  It has a real feel to it. We feel like we are flies on the wall where something bad is going down. I have no doubt that part of the way it is shot is a result of the budget but writer director Aksel Rifman turns what would have been a minus in the hands of some one else into a positive since the fact that we are largely anchored to a few rooms tricks us into thinking that this is happening in real time right before us.

The performances are all largely on target, and believable. My sole complaint is that one of the bad guys constant flipping of a knife is too much. It feels like he's doing it for the camera as opposed to something his character would do.

Please forgive me if this review reads slightly awkward but I am trying very hard not to spill the beans as to what is happening. This is a taut thriller where layers are peeled  away and the ground shifts as a result. I want very much to to discuss what happens and why this film is so good but I find that with each sentence or paragraph where I try to say something I end up leaking something out, so I cut it out and write something less thrilling.

Trust me this is a nifty little crime story that you really want to see before people start discussing it. Writer director Rifman has crafted a rough around the edges gem that has more heart soul and suspense than most of the big budget films that come from the big studios.

This is one of the finds of the year.

If you are in New York do yourself a favor and get down to the Winter Film Awards tonight and see this great film before your friends and neighbors. Tickets and more information can be had here.
Posted by Steve Kopian at February 17, 2019