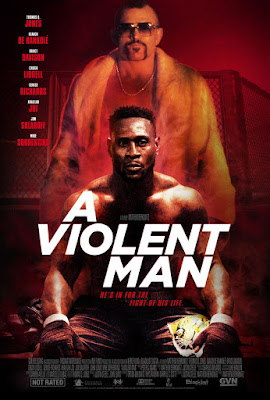 MMA fighter working in a gym is asked to spar with the champion. He then lays him out and video of the encounter goes viral. Soon after he is implicated in a murder that threatens to send him to jail.

One of the best modern noir films I've run across in the last few years is also one of the top five films at this years Kew Gardens Festival of Cinema. A call back to the classic days of noir this film gets everything right creating the perfect mood that noir fans love.

Expertly acted the cast is dead on perfect with not a bad one in the bunch. Even Denise Richards who can be up and down depending on the role shines here. Additionally MMA legend Chuck Liddell is great as the champion, imparting more to the role than most sports figures ever could.

I loved this film a great deal. And while I could quibble with some of the denouncement, I don't think it all lines up, I still would gladly grab a tub of popcorn and soda and go again.

Recommended when the film opens Friday
Posted by Steve Kopian at February 06, 2019