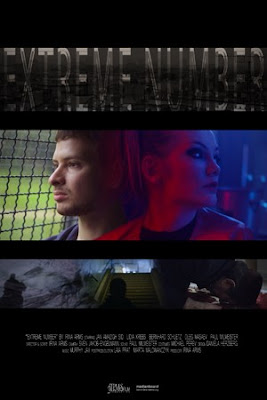 Chechen rebel makes his way into Germany. Captured and put into a prison hospital because he has tuberculosis he makes the acquaintance of a translator who helps him escape. He then is sent on a mission by his superiors in Germany.

Based on a true story  and mixing recreation with footage shot during the war in Chechnya EXTREME NUMBER is a film with a lot on it's mind. Pondering the notions of why people choose to fight and what is acceptable violence the film has a great deal of food for thought. As a result this is a film that is going to hang around in your head for a long time after you see it as you mull what is the right thing to do.

As heady as the film is I found it hard to completely give myself over to the film emotionally. While the actual video allows us to get a good feel for why events happened as they do and they give us a great understanding of the backstory, there i so much that it keeps us at a distance for the films brief running time. Yes, we get to know the translator, but even with the voice over I never felt connected to the soldier.

While an important film in that it will make you think about why people fight and because it helps us understand the war in Chechnya it never manages to connect to out hearts so it remains a very good film instead of a truly great one.
Posted by Steve Kopian at February 19, 2019