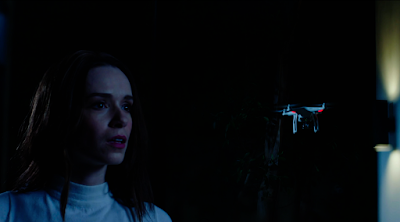 From Jordan Rubin the director of ZOMBEAVERS comes THE DRONE about the soul of a serial killer that takes over the drone he uses to spy on women with. Just because he's in a drone doesn't mean the killings stop and it's up to his ex-wife and her new husband to try and stop the carnage.

Nominally a horror comedy the scares aren't really there and the humor is almost as low as you can go. The jokes are more groaners than laugh out loud funny ones. While there are some laughs more often then not you will be shaking your head.

Best viewed if you are with a group of friends who are in the mood to riff a film, THE DRONE is a film that requires that you absolutely and completely disregard any sort of logic, even internal. I say that because  nothing in this film makes one lick of sense on any level. Yea, its a goofball horror comedy but we need to accept that a small drone can cause so much damage, even on it's own terms, for this to really work and THE DRONE never provides that. (How does it come through a hole in the wall smaller than it is? How does it fly up the cop's bottom? How does it chop people up with such tiny blades?)

Because I loved ZOMBEAVERS so much I went along to the end of THE DRONE but found I was disappointed at almost every turn. While it isn't bad, it just never manages to walk the fine line of horror/comedy without tripping and falling on it's face.
Posted by Steve Kopian at February 08, 2019