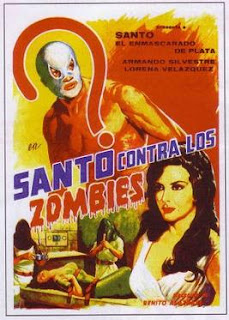 I have a weakness for Santo movies, especially the black and white one. Part of it is that they were just weird little treats that would occasionally pop up on New York TV growing up. Later they would show up here and there like on Commander USA’s rotation of movies and I was filled with nostalgia. A large part of my love of the films is that they represent a complete and total disconnect from seriousness. A masked wrestler is fighting monsters. Yes its very comic book, but for me it’s even more simple than that and it’s all reduced to good vs evil in a pantomime sort of way. Actually what I absolutely love about the films is that they absolutely defy any attempt at deeper meaning. Its pure popcorn for the soul

Such is the case with Santo va The Zombie (aka Invasion of the Zombies). The film has Santo battling an evil genius who is turning gangsters into unstoppable zombies. He uses his army of baddies to rob, assault and kill and there is no one other than Santo who can stop them.

An absolute joy this film is just pure fun. You know who the good guys are, you know who the bad guys are. They fight and the good guy wins. Its not high art just 90 minutes of distraction. For however long the film runs we are somewhere else and forgetting the troubles of the world.

Before you dismiss the film as silly realize that this is just one of dozens of films with masked wrestlers in them. Mil Mascaras, the Blue Demon and many other masked wrestlers have also made movies over the years (yes they are still making them). The genre was briefly popular enough in the 60’s that we even got films like the Superargo films which sought to one up the Mexican films. Some of them, particularly the Santo films, are really good beyond the genre.

If you want a great film to try to see if the masked wrestler films are for you Santo vs the Zombies is the perfect place to start
Posted by Steve Kopian at February 19, 2019