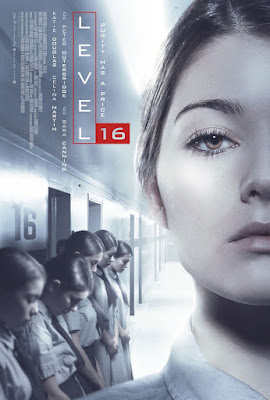 Opening tomorrow in theaters and on VOD is LEVEL 16 a dystopian tale about a group of girls locked away in sterile industrial "school" raised since they were children by an head mistress who taught them the finer ways of being, and for whom cleanliness and perfection is all. The girls are all passing their way through various levels in the hope of one day getting a family of their own.

Full disclosure I have been trying to see this film since it was on the festival circuit last year. Either problems with the screener or being required to hold off the review until now (I wasn't going to sit on a review for four months) prevented my seeing it. I know having to wait so long to see the film built up impossibly high expectations that the film could never live up to....at the same time even if I had just seen the film way back all those months ago I still think I would have been disappointed.

Playing more like a cinematic version of a dystopian young adult novel LEVEL 16 never quite achieves the hard edge seriousness that a tale like this should have in order to work. While I understand why it isn't as gritty as I would have liked, owing in part the real reason the girls are in this school, it still keeps this feeling more like dress up than real life. It feels like the filmmakers are playing to a set audience instead of recreating real life.

I know part of the problem is that the cast of girls is often uneven. While the leads are fine, some of the other girls are less so. I'm pretty sure that a large part of that is the supporting actresses aren't given a great deal to do. While there are a lot of young women there aren't that many characters with the result the girls kind of flounder and they become window dressing. They aren't given anything to do other than be part of a nondescript crowd and it feel less real then taking a random group of people in a doctor's waiting room or street corner.

While never really bad, it never really thrilled. To be honest other than desiring to find out what the purpose of the school was I stopped being interested by the half hour mark. I had a feeling that the film was going to go through it's gyrations for a certain amount of time until the big reveal. It wasn't all that earth shaking, though a couple of minor ones after that were ore interesting.

Is LEVEL 16 worth your time and money? If you want a good but not great dystopian tale, give it a shot. Also add a plus if you want a girl power tale about friendship take a look.
Posted by Steve Kopian at February 28, 2019