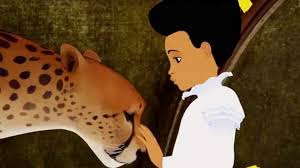 Michel Ocelot's DILILI IN PARIS maybe his most beautiful film. A mix of his flat 2 style of animation with computer generated 3 images and real locations it delights the eye with its stunning visuals and eye popping colors.

Set in Belle Epoque Paris, the film follows young Dilili as she teams up wit delivery boy Orel to try and track down a band of evil doers called the master men. They are kidnapping young girls in order to make them their servants and stealing money and jewels at every turn. Along the way the pair get help from a variety of real people such as Marie Curie, Marcel Proust and Picasso.

Stunning visuals give way to a rip roaring adventure. Wild bike chases, submarines and airships are just some of the delights that form the various forms of transport used in the adventure. Its all edge of your seat stuff thanks to Ocelot's excellent story telling. Who would have thought a near silent rescue would result in explosive cheers from an audience. It happened in the later part of the film when Dilili and her friends make an effort to rescue all the trapped girls 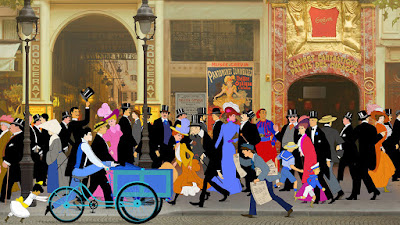 Kudos to Ocelot as well for making a film that raises the question of equality between the sexes (the bad guys want to oppress women) and race (Dilili's mother is African and her father is French and she feels she belongs nowhere). While he doesn't resolve all the issues he does make them prominent enough that any good discussion of the film must at least note them as well.

As good and near great as the film is Ocelot has made one error in telling the story and that is loading it with famous faces. You can't go more than a couple of minutes without a a famous person appearing. It's interesting to think that so many famous people could have a piece of the mystery  but at the same time it grows tiresome as we go from famous face to famous face just because. Its not fatal but it takes the edge off things as we try to figure out who will show up next.

One of the joys of this years NYICFF, you really should make an effort to see it big where the images will over whelm you in the best possible way.

DILILI IN PARIS plays the remaining three weekends at NYICFF so buy tickets and go.(Information can be had here)

One quick note- It should be noted, but not held against NYICFF, that the print running at the festival occasionally suffers from frequent moments of white on white subtitles. While not fatal and never readable, the lack of clarity forces us to spend a little too much time focusing on the words instead of the images.