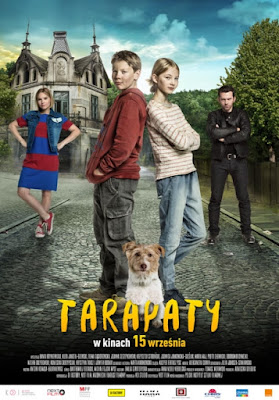 Julka is at boarding school while her parents work in France. When her parents forget she is to join them for summer vacation she is forced to stay with her aunt who barely acknowledges her existence. When Julka leaves a door open and thieves steal everything off the walls including some valuable plans, Julka and the son of one of her aunt's neighbors must spring into action and try to track down the stolen items.

DOUBLE TROUBLE is an amusing film that is going to play better for older children than adults. The reason is that there is a lightness of the touch in regard to the happenings and while there is suspense as to what is going on (things are not quite as they seem)  there never really is any doubt that things will be okay. Part of it is the tone of the film and part of it is the narration pretty much says as much right at the start.

For kids who haven't seen a lot of caper films this is going to be a blast since it is both funny and tense. For the adults it will be a amusing but nothing special since the caper isn't a solvable mystery as one that is revealed in left hand turns. It's never bad but this is one for the kids more than the parents.

Worth a look if you're taking the kids.