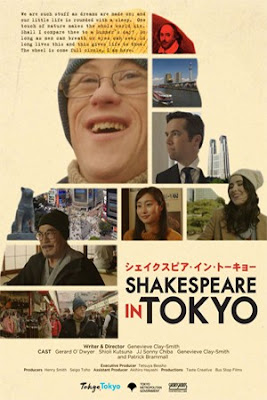 SHAKESPEARE IN TOKYO is in the running for the best film of 2019.  A joyous celebration of life and family and letting go it moved me to tears and laughter and just book a big ass smile on my face.

After their mother dies Anthony,a business executive living in Japan finds himself saddled with a younger brother Ben who has Downs Syndrome, which he thinks means he can't take care of himself. However the young man  can, and when he gets the chance he heads off to see Tokyo armed only with his charm, his sketchbook and an encyclopedic knowledge of the Bard of Avon.

Warm, witty, wonderful and just plain great this film charm the pants off you. A wonderful little tale about how people are not always what we think and how we must seize the moment. I was in total heaven. (It also says a great deal about brothers which touched my heart)

That the film works as well as it does is due entirely to Gerald O'Dwyer as Ben. He has so much charm you would probably expect that left on his own O'Dwyer would be running around the world making friends where ever he goes. He's so good that I am kind of hard pressed this isn't a real story.

One of the coolest parts was the unexpected appearance of the great Sonny Chiba as a calligrapher who plops down next to Ben and then teaches him how to do calligraphy. From the look on Chiba's face and the clips cut together in the sequence it must have been an absolute blast  and I want to see the out takes. (And for those wondering this IS  Chiba's best screen role bar none)

I love this film more than words.

One of the best films you will see in 2019. It is a masterpiece and an absolute must see.

Thank you to the Winter Film Awards for bringing it to New York and putting it in our lives.
Posted by Steve Kopian at February 17, 2019