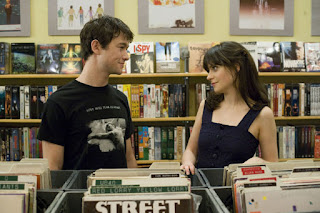 The story of a relation ship over the course of 500 days. Zooey Deschanel plays Summer, the object of Tom Hansen's eye (he's played by Joseph Gordon-Levitt). We watch the relationship out of order as we are told what day we are seeing.

I think this is the sort of film that we probably can all relate to, more so if we've had a relationship crash and burn and we've had to crawl from the wreckage. It is as, the advertising says, not a romantic film but a film about romance in all its joy (there's a musical number) and sorrow. recommended.
Posted by Steve Kopian at May 09, 2017