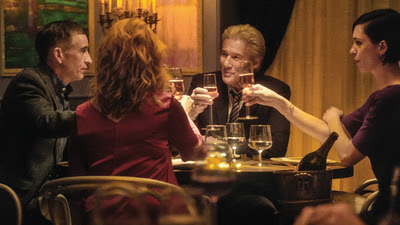 I have a lot of issues with THE DINNER.

The film is about the dinner between two estranged brothers one a college professor (Steve Coogan) and the other Senator (Richard Gere) at a delicate point in his career. They have come together to discuss a private family issue (relating to their children) at a fancy restaurant. Secrets will be revealed...and are then never resolved.

I never wholly bought the plot mechanizations. It all felt set up to make a point and there was an aire of artificiality to it all. I disliked it so much I wasn't going to review the film, however I have to mention the the performances of the four leads (Coogan, Gere, Laura Linney and Rebecca Hall) are stunning and were it not for them I would dismiss the film out of hand.

This is third film version of Herman Koch's novel in the last four years the film.Why? I'm not sure. It is the least necessary film of the year so far. Other than the performances there really isn't a reason for this to exist. To be honest I don't know what there is in this story that has drawn filmmakers around the world to it. While I know it is a story that questions what we'd do to protect our children and ourselves ultimately it is a tale about privilege since the the inclusion of a senator adds all sorts of shading that make this not something that most of us can relate to. (And any film, such as this, that has a ten page explanation in the press notes from the director about what the film is doing clearly isn't working the way it should)

Is the film worth seeing? If you love great acting but you have to be ready for the weird plot line that you'll never really buy.

THE DINNER opens Friday and should be avoided.
Posted by Steve Kopian at May 03, 2017