I know Nate Hood reviewed this back during the NYFF, but I had a review done and I don't want it to go to waste so now that the film hits theaters Friday here my thoughts. 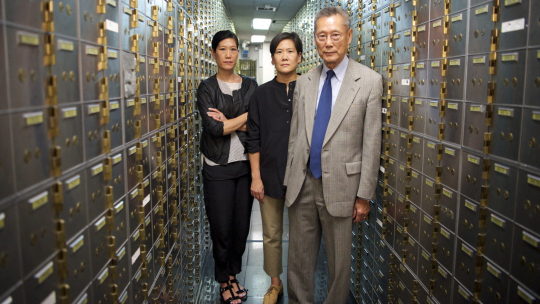 As a former frequent traveler through New York’s Chinatown I was well aware of the Abacus bank. It seemed like it was on every corner. That’s not the case, but it does make clear that the bank is clearly part of the life of that New York community. However when the Manhattan DA decided to go after the bank for bad loans it came as kind of shock. The bank was never like the other guys, it was and is family for many people.

And so it was that in an age of too big to fail the Manhattan DA decided to go after someone he thought he could take down and look like he was keeping everyone safe. Never mind that he couldn’t prove that the “corruption” was more than a couple of bad guys, particularly the prosecution’s lead witness who couldn’t stop telling lies, even on the witness stand, he was going to go for the kill.

Coming in as the case was heading to trial, legendary filmmaker Steve James waded into to fray and documented everything. Talking to everyone involved with the case, except the prosecution witnesses who lied under oath, James lays out the case beautifully, to the point where you wonder why the DA pursued the case when it was clear that the bank itself wasn’t to blame.

James film is a solid piece of reporting. It plays like, what it is, a solid FRONTLINE documentary. It’s a great piece about an injustice that in retrospect seems obvious. Of course when people believe what people have their own agenda or want to stay out of jail bad things happen. (Iraq war anyone).

While the film is excellent, the film is probably the least film that Steve James has done. As a man who has given us banquet movies such as HOOP DREAMS, ABACUS is a tasty after dinner snack. It may be perfectly prepared but compared to the filmmakers other delights it seems a little light. That doesn’t mean that the film is bad (absolutely not) it’s just not as detailed as I would have liked (say some sign of the women’s families other than the odd reference).