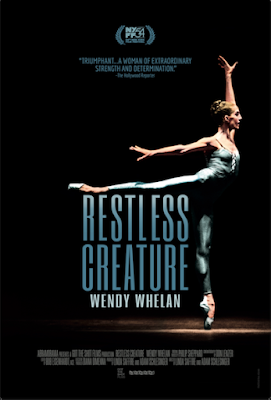 RESTLESS CREATURE is a portrait of ballerina Wendy Whalen, who after30 years with the New York City Ballet decides to call it quits and move on.  We watch as she deals with the damage her body has suffered, she plans her farewell and tries to figure out what to do next.

One of the best of the flood of  recent ballet related docs, RESTLESS CREATURE is a portrait of a woman trying to figure out where life is going to take her. Beautifully filmed is a rare bird in ballet films  which not only makes a non-ballet fan understand not only how good Whalen is but also appreciate the dancing. I can't tell you how many dance films I see where  the director keeps everything so inside that unless you're a fan going in you won't have a clue as to what is going on. That is not the case here and directors Adam Schlesinger and Linda Saffire have made a film that has me wanting to go see Whalen dance when she comes to town.

I don't know what to say other than I highly recommend the film when it opens in theaters starting May 24th in New York and June 9th in LA.
Posted by Steve Kopian at May 21, 2017