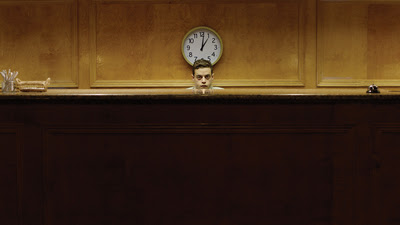 I'm puzzled by BUSTER'S MAL HEART but not for the reason the filmmakers would like. What puzzles me is not the crazy plot, rather that the film is generating the level of talk it is, the film simply isn't that good.

The plot of the film tells the fragmented story of Jonah, a married man who works the night shift at a local hotel who gets mixed up with a stranger who talks of the Great Inversion. At the same time we see a version of him where he is know as Buster a mountain man and a third where he is trapped on a boat at sea. How the films don't link up is the film.

Despite some great performances and some good secondary characters the script ends up a total mess. Striving to be twisty turny and obtuse like MR ROBOT or JACOBS LADDER or other reality bending films the film never manages to pull the weirdness together. While some people loved the strangeness I and the people I was sitting with were less than thrilled. No matter how we parsed it out there were bits that never fully linked up enough to work

We never really know what the fragments really are. While some part of the Inversion is supposed to allow one to become two we don't know how that works. I would say remove the whole boat bit except that it ties into a moment late in the game and those threads would be left hanging.

Little makes sense in the film even on its own bent sense of reality. Worse several of the twists brought groans at my screening as people really couldn't believe the film was that cliched.

I suspect had I not read some glowing reviews I might have liked it more but I think the real problem is that I've seen too many genre films where the nature of reality is questioned to buy the bullshit being offered here.
Posted by Steve Kopian at May 02, 2017