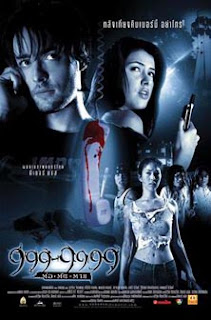 After several gruesome deaths at another school the members of the "daredevil's club" wonder what happened to kill all the kids. When a student from the affected school transfers to their school they learn that the victims all called a certain phone number which would grant your wish then kill you. Partly out of curiosity and partly to get what they want, the kids begin calling the number, and dying.

Not as bad as some recent Thai horror, nor as good as others, this film plays like Goonies-lite meets a gory horror film as the fun loving kids are killed in rather nasty ways. The mixing of the styles doesn't work since the film never seems to know what it wants to be. It doesn't help that you almost instantly know whats going on because the film doesn't really give you a chance to think anything else.

Some people I know thought this was going to be the next big thing, unfortunately they were wrong and we're left with an unremarkable horror film that will probably be completely forgotten in another couple of years.
Posted by Steve Kopian at May 14, 2017