The problem that is LONDON HAS FALLEN (2016) 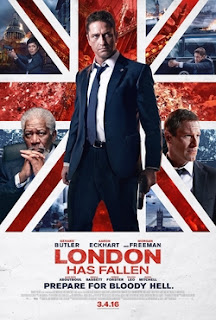 LONDON HAS FALLEN was one of the big action films of 2016. It's a sequel to THE WHITE HOUSE HAS FALLEN a film I liked for the sheer silliness of it but which most critics hated with a passion. LONDON ups the ante and the stupidity to epic levels

The plot has a Pakistani business man getting revenge on the West  for a drone strike two years earlier by attacking the funeral of the British Prime Minister. Mayhem results.

The film has problems-lots of problems.

The first problem is that the film takes an agonizing 25 minutes to get going. It is a painful 25 minutes as Gerard Butler gets ready for a baby, ponders his resignation and slowly makes his way to London. Its awful.

The second problem is the terrorist plot is so huge and so involved it basically would involve every cop in London. Once everything starts every cop seems to be bad, every one on the street other than a small crew is a crazy killer. Really? Even assuming it was possible that the bad guy could have all the bad cops right where he needed them it is impossible to fathom. Additionally ludicrous is the notion that they could plan it and get them in position with two years planning.

Yea I know I shouldn't be thinking about it - but there are so many other plot points that make no sense you can't help but notice it.

On the other hand once you  get 25 minutes in the film explodes with action. As a film full of over the top motion the film is great. Yea it makes no sense but it if you keep your brain in the dish by the door its a lot of fun...

I hate the plot of the film but I love the action.

Where does that leave the recommendation?

If you come in 30 minutes in and just go with the bullet ballet its worth it...if you need logic and reason then stay the hell away
Posted by Steve Kopian at May 27, 2017