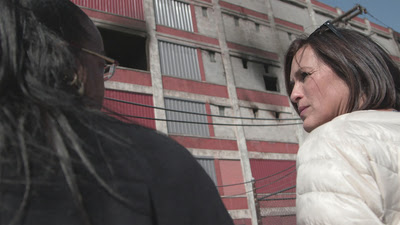 Deeply troubling look at the backlog of rape kits in America. While all across the county tens of thousands of rape kits, evidence taken from the bodies of rape victims, have been, only a small number have actually been tested. The upshot of this is that not only has justice been denied for all the victims but serial rapists have been allowed to run amok across America.

Beginning in Detroit where the untested rape kits were discovered to be simply sitting in a warehouse on the edge of town, the film works outward to show how this is not an isolated problem and the horrible things that are happening as a result, While some jurisdictions claim its a cost issue, in many cases its simply that the police feel that the rapes weren't really rapes but consentual sex. The attitude is the result of a ingrained bureaucratic misogyny as well as the police simply not being trained properly. Most police simply do not understand that what they think of not fighting back or not caring is the result of the body's natural protection mode which shuts a person down and puts them into a state that allows survival.

The situation is so bad, that in a place like LA, that almost no kits have been tested and if if they are the odds of a conviction is next to zero. The prosecutor's office simply doesn't believe that people are being raped. While the audience of critics I saw this reacted all through the film, the biggest gasps were from the revelation of the nonsense going on in LA.(hopefully this film will result in the storming of the prosecutor's office by angry citizens)

The most frightening thing about the film is that it clearly shows how because the rape kits are not being tested serial rapists are being allowed to roam free. CODIS, the DNA library is constantly linking up predators across the country. Its a horrifying thought at just how many really bad guys are allowed to destroy lives because the police aren't doing the right thing.

This film will piss you off.

I AM EVIDENCE is a chilling and important film. it is a must see when it finally hits HBO because it will make you see a horrible social injustice that is being inflicted upon the women of this country.
Posted by Steve Kopian at May 01, 2017